Post, chat, or discuss topics related to Star Wars, modeling, 3D graphics, or something close to this.
Post Reply
4 posts • Page 1 of 1

Hey guys, ran across the 2006/2012 revell snap tite imperial shuttle today and picked it up. Looked online and people swear its somewhere between 1/106 and 1/122 scale. So here's the problem I have - the old grey box Tydirium shuttle form AMT/ERTL was supposed to be 1/87, and that seems legit to me. But when I got home and slapped the revell together to see, I found some funny stuff. The Revell give you a stormtrooper and a imperial pilot for the cockpit, so I grabbed a Bandai 1/72 X wing pilot and sat him next to them...OH BOY, something is going on with people's calculators (LOL) check out the pics and gimme your thoughts!!!

Yeah, the Revell pilots are way too big for that model and are a pretty good fit for 1/72 scale models. Remember that you can fit at least 4 people into the shuttle cockpit, which is impossible with those figures and that kit. That happens a lot with Revell kits - their TIE Fighter is basically the same size as the Bandai 1/72 but the pilot figure is huge! Same with their ARC170 kit - the dimensions of the ship make it about 1/70 but the figures are also oversized. And then you get something like the tiny Kylo Ren figure in their TIE Silencer kit (again close to 1/72) or the Clone Troopers in their AT-TE, which are also too small for kit that is basically 1/72.

Two things to remember about Revell SW kits - never trust the scales on the box and never assume the pilot is the right size for the kit.
photobucket: http://s1352.photobucket.com/user/ukaed ... s%20Models
Top

Yeah, as others have said, the figures are way out of scale. I think they went must have used the old Kenner toy as an inspiration for this 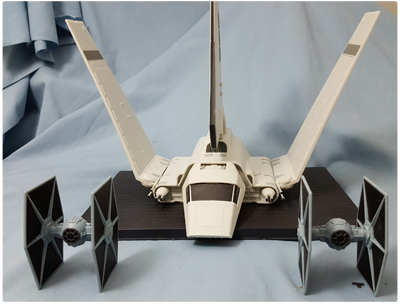 It is just a bit small for pairing with 1/72 stuff, but if placed in the background the AMT/MPC one could get by
If you have a tool and aren't aware of what it can do, its dangerous. A jedi can do amazing things with a lightsaber. A roomful of chimps with lightsabers... would get messy.
Top
Post Reply
4 posts • Page 1 of 1