How'd you guys get yours so quick?? Looking forward to this one.

(moderator note: I'm going to move this to the TFA group build section

Yeah, I'm waiting patiently for mine too.

I'm really looking forward to seeing how this one progresses, it's looking really good so far.

Amazon, express shipping is how I got mine. Humbrol 46 matches BBs orange fairly well.
Top

Am I missing something, or does it seem like there are missing posts?

i.e. the first post in this thread just starts off with Great Start! next post is Looking Good!

where is the picture(s) everyone is commenting on?

If you have a tool and aren't aware of what it can do, its dangerous. A jedi can do amazing things with a lightsaber. A roomful of chimps with lightsabers... would get messy.
Top

AH yeah that's my mistake. I accidentally deleted the first post when I was moving it to the group build...I'll try and fix it...
modeling portfolio
WIP modeling blog
artist website
Top

I recently picked up the new R2-D2/BB-8 combo kit. The Artoo is just a repackaging of the released in the spring of last year, which is nice to have multiples of, but obviously the main draw is BB-8! As people who have seen The Force Awakens know, BB-8 is the new ridiculously adorable droid that pals around with Poe Dameron (and later Rey) and like Artoo before him, is key to the plot of the movie.

I went back and forth on whether or not I wanted to paint this kit. I was leaning towards "not" because I wanted this build to be the thing to break the modeling funk that I've been in the entire month of December. After thinking about for the better part of a day, I decided that I would paint the entire kit. Color matching his orange will probably be tricky as I don't have the widest selection of orange paints on hand and I don't really feel like ordering the paints to match. Other than that, it will be an easy build because everything else is either white or silver. So in order to prep for painting, I removed all of the parts from the sprue tree and made a BB-8 forest on my hard Styrofoam blocks with the pieces organized by the part of the body that they belong too. 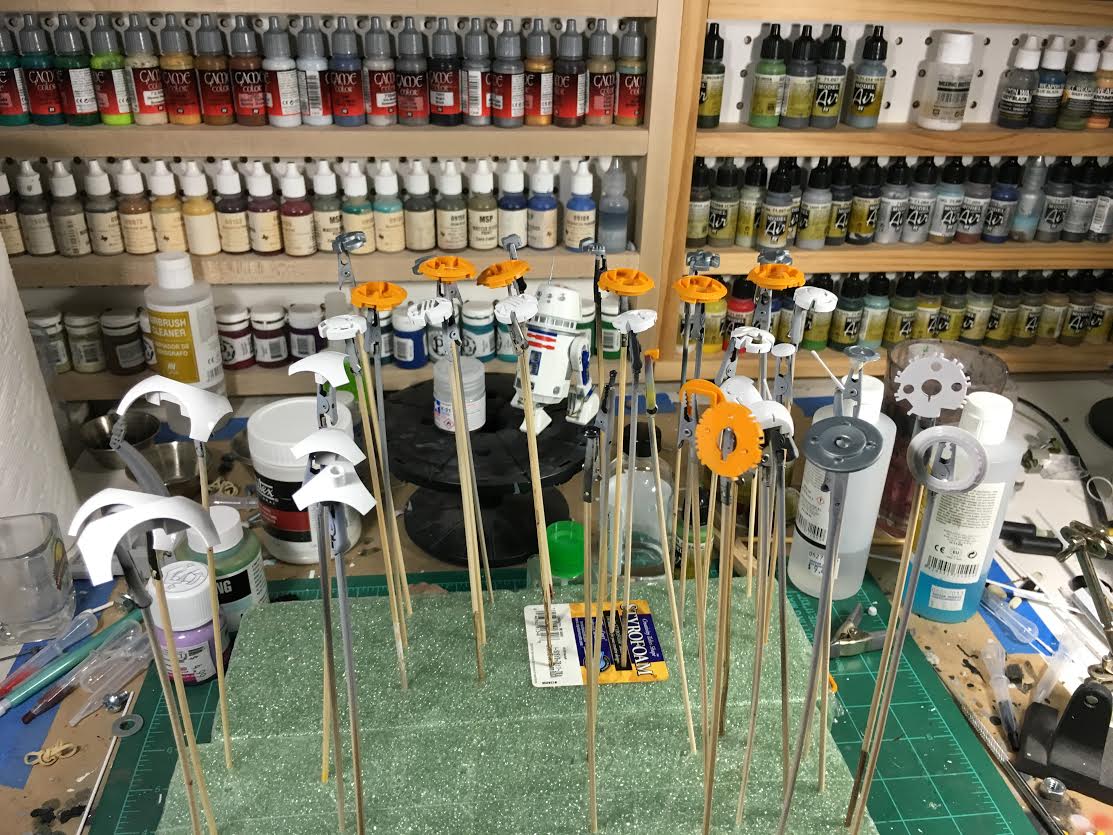 Like Artoo, BB-8 comes with all of the gadgets you see in the film: the 'disk drive,' the arc welder, and the blowtorch. I haven't decided if I will use any of these extras, but I'm leaning towards painting the blowtorch just because that scene in the which he uses it is pretty amusing! 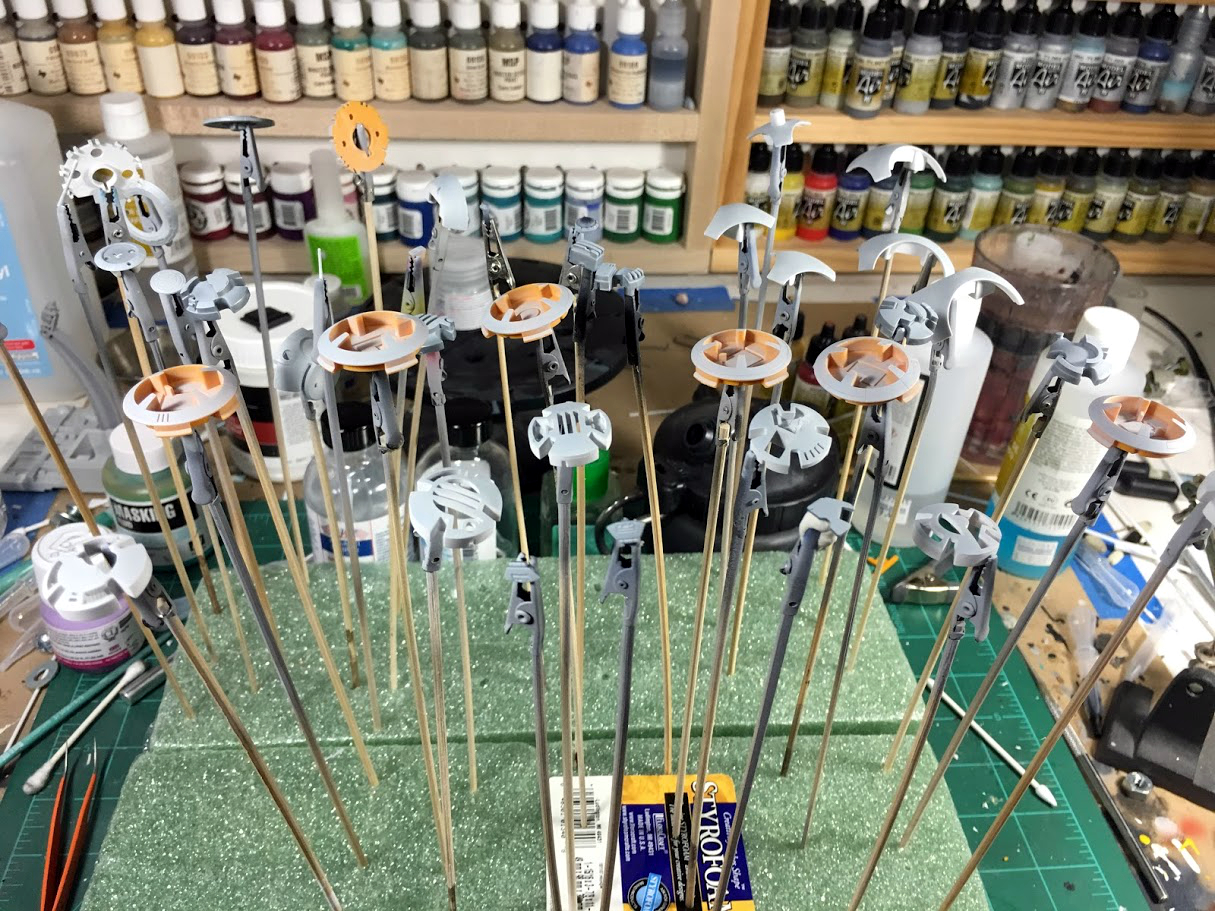 After priming all of the parts with Alclad II grey primer, I let them dry for about an hour. Since it is a lacquer-based primer, the cure time is incredibly fast; the bottle says it's dry in 30 minutes, but I always like to get it a little extra time. However, after it dried I realized I hadn't decided what direction to take with the paintwork yet. Normally I would preshade everything and then apply the base coat, but I'm worried the preshade might throw off the "look" of the model. I'm also worried about how shallow some of the panel lines on the body sphere are so I'm trying to limit the amount of paint I apply to it. 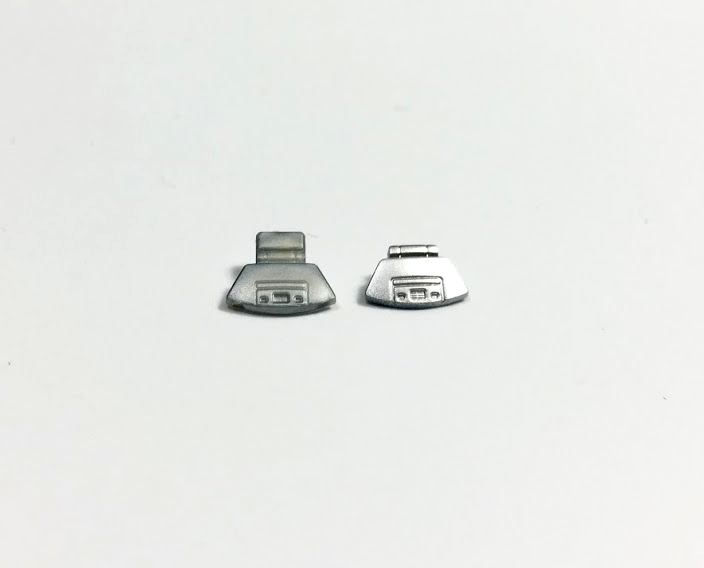 Even though I'm not entirely sure how I want to go about painting the white and the orange, I knew for certain how I wanted to do the metallic parts. To me, the most obvious choice is Alclad II Aluminum (ALC 101), which is probably the most realistic finish possible for a model part. In the above picture, the hatch on the left is how it appears directly from the sprue while the one on the right has been sprayed with Alclad II Aluminum and it's a night and day difference (the bright lights of my painting desk help exaggerate it as well). It's also important to remember that Bandai's metallic-colored plastic is actually pretty good and would look decent enough straight from the box.
Top

I suggest assembling the head prior to painting. That way you can eliminate the seam before painting.
Top

I've already come up with an orange mix that I think closely matches the filming puppet, I just haven't posted the pictures yet.

As far as the seam on head goes, I'm not concerned about it because it's in a natural spot for a panel line (at least on the left side of his dome).
Top
Post Reply
19 posts