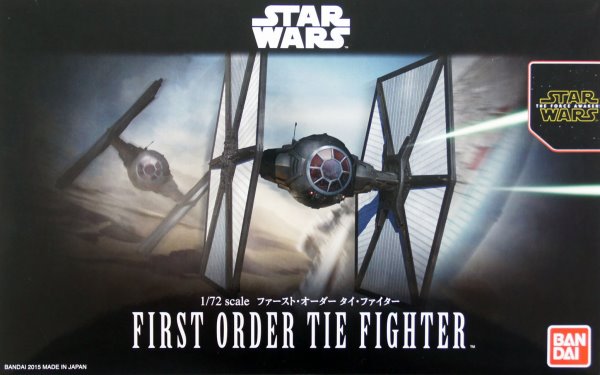 The newest carnation of the venerable TIE fighter shares a lot with it's predecessor, such as the basic shape, the distinct twin ion engines, and dual laser cannons. Aside from the reversed color palette, the newer model sports a deflector shield, more powerful weapons, and an upgraded sensor array. The kit itself is molded in black and light grey plastic with the usual Bandai precision. Like all Bandai kits, it snaps together in a hurry and the final result is very nice, even without paint. 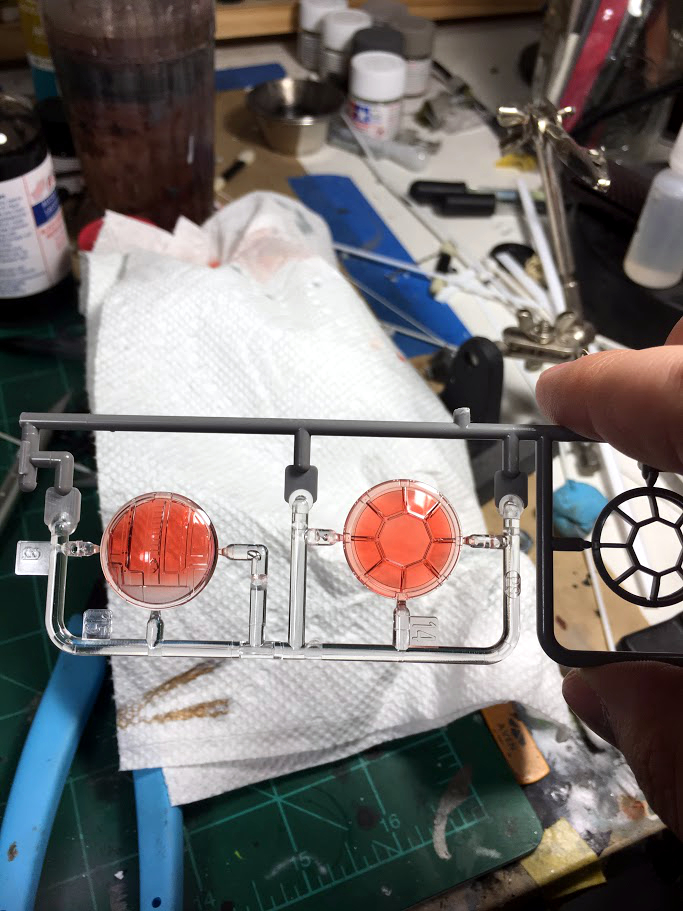 I decided to tint the windscreen and top hatch glazing using Tamiya Clear Red (X-27) to mimic the the box art. Of course some people will say, "The glass isn't red in the movie," but I'm not overly concerned with screen accuracy and I don't light kits so this is the next best thing. Also, it looks cool. 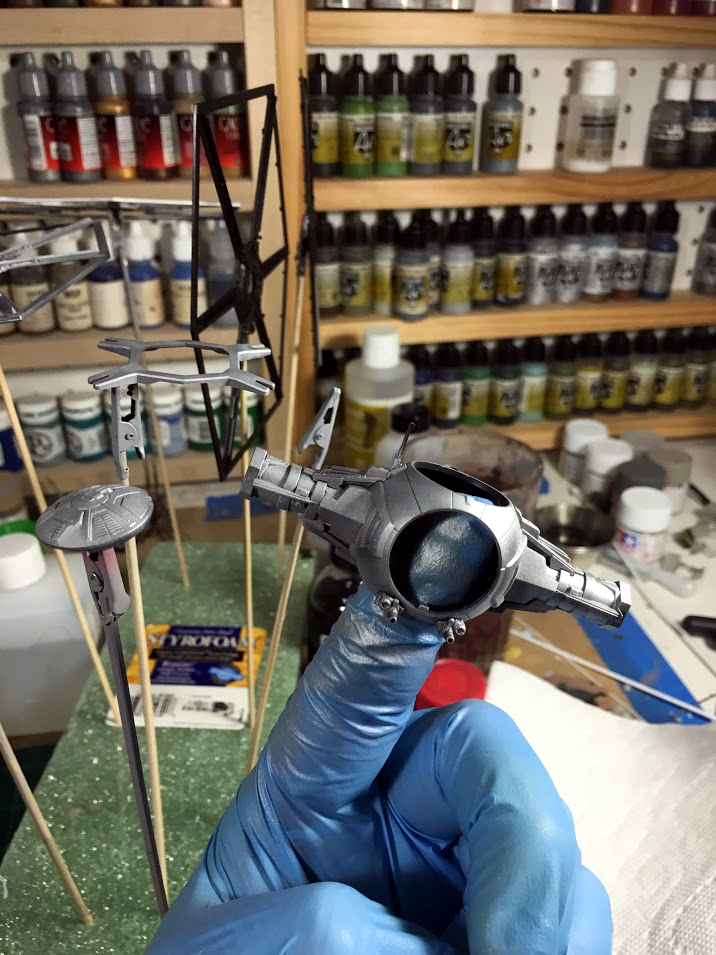 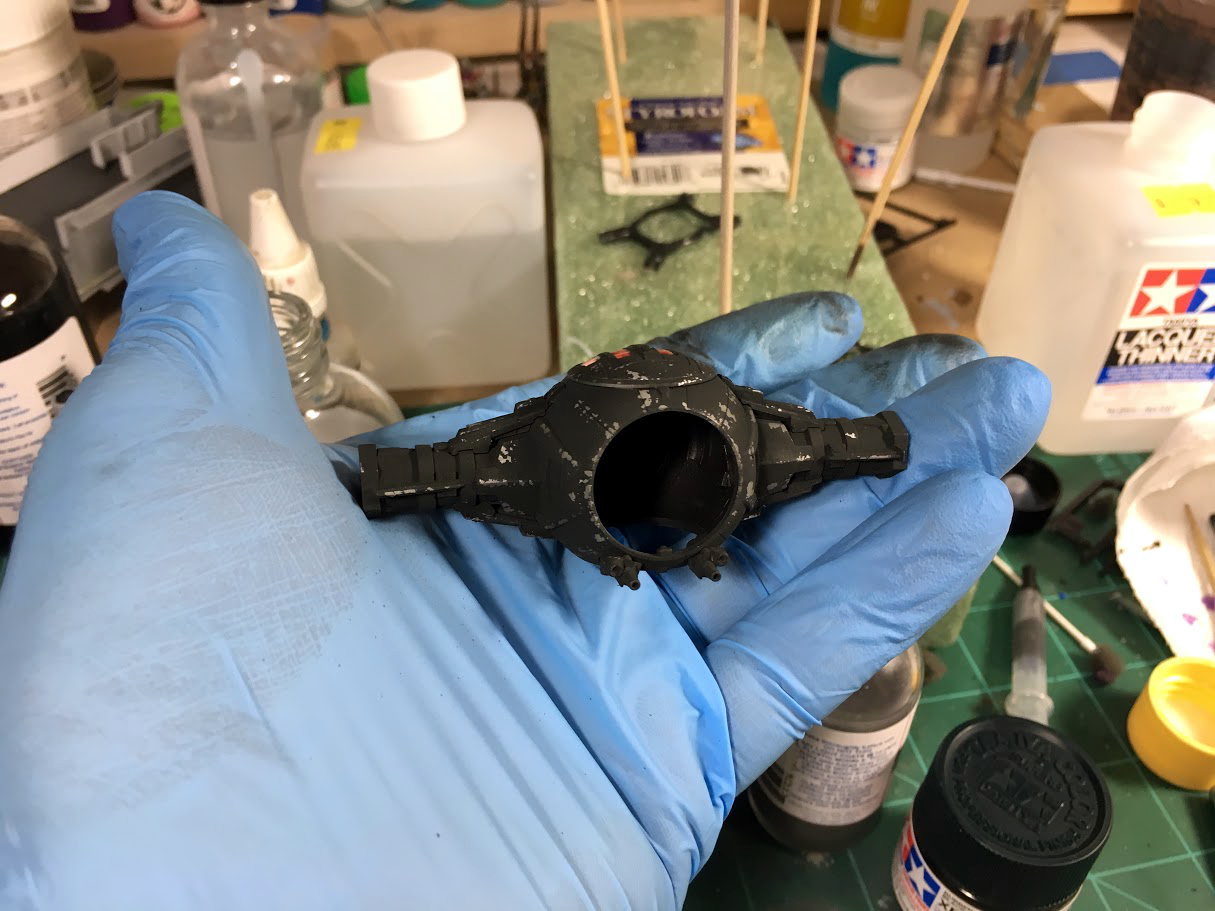 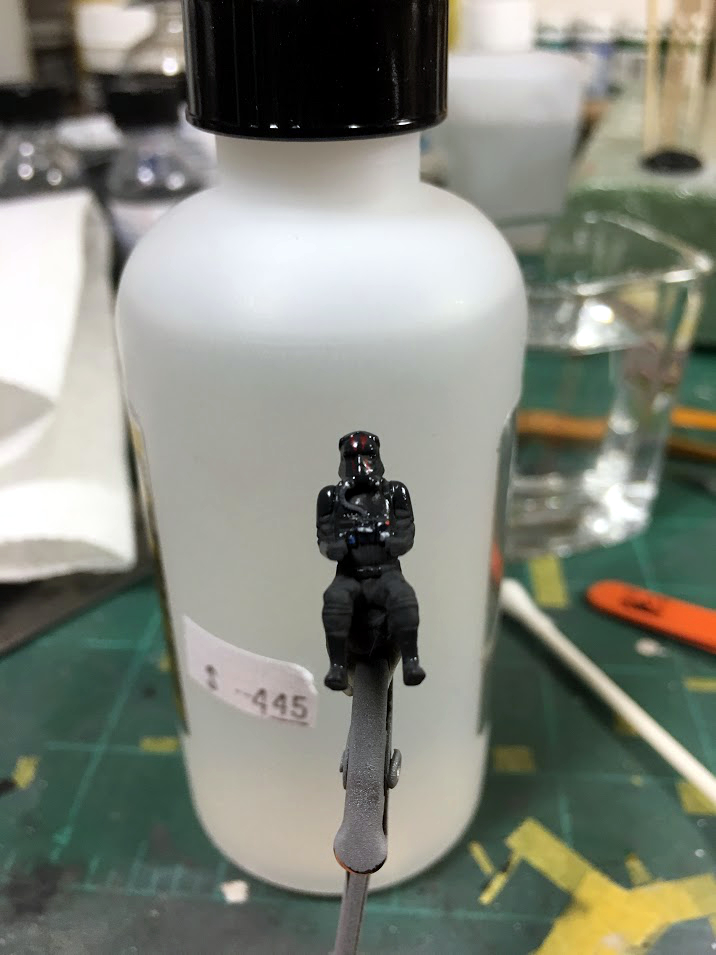 I wanted to go with a weathered look on this TIE fighter because the First Order no longer treats its personnel as expendable, given that their ships are shielded now. It makes sense that these fighters would see considerable action and over time would accumulate wear and tear; this particular TIE is being piloted by a veteran Special Forces pilot and has seen plenty of combat. After priming with Alclad grey primer, I gave all of the hull and wing frames a coat of Alclad Dull Aluminum (ALC-117) and then applied Humbrol Maskol with a small piece of torn foam where I wanted the chips too be. I then gave the entire ship a coat of Tamiya Rubber Black (XF-85), which is a nice near-black color. After the paint cured I used a piece of poster tack to remove the liquid mask, revealing the metallic color underneath. Because Tamiya paint is so matte, the Dull Aluminum was too bright and I decided to give everything a light dusting of Rubber Black to tone it down a little. 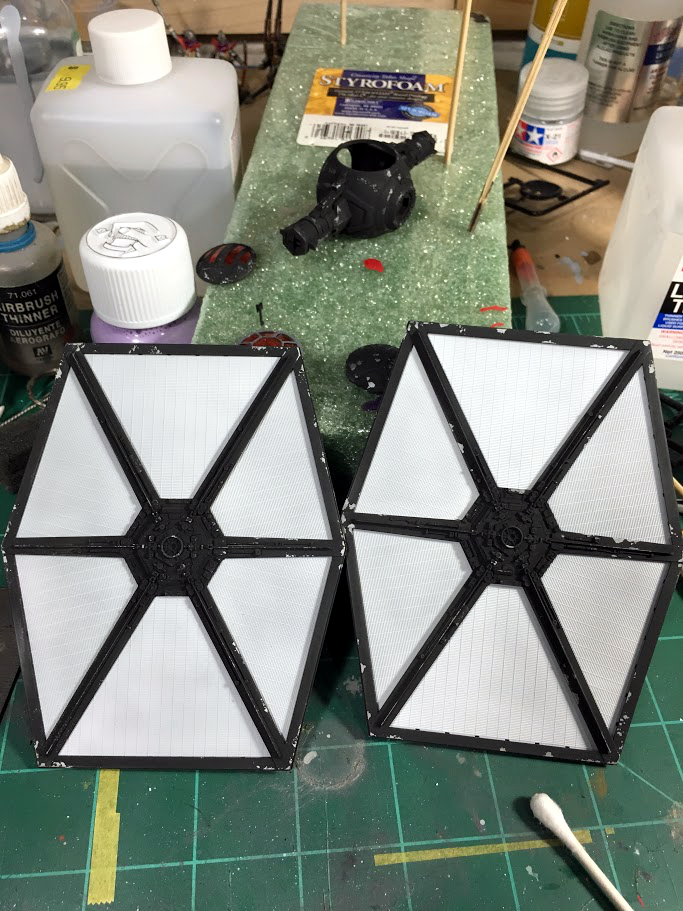 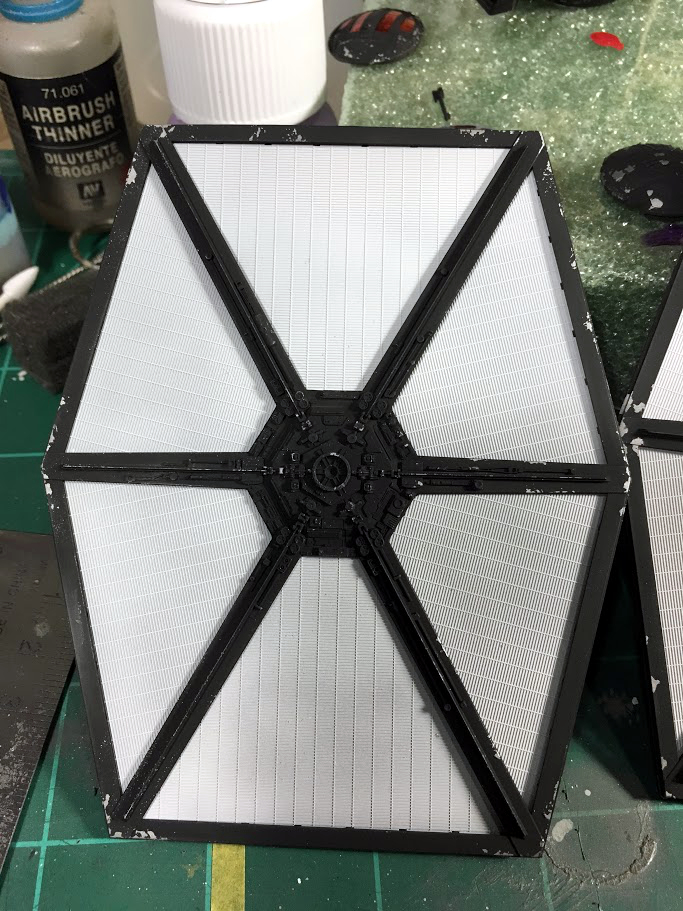 The wing panels were painted with a 12:1 mix of Tamiya Flat White (XF-2) and Sky Grey (XF-19), which is much lighter than the grey they come molded in.

I need to figure out how I'm going to further weather the model. Normally I would do this with oil washes, but given the almost-black color, I'm not so sure that would work out well. I might give everything a light drybrush with some grey oil paint, but I'm not sure how that will turn out. While I think about what to do, I'll start working on the cockpit tub so I can get the main hull assembled.
Top

Ahh, this is what I've been wanting to do for a while, red tinting, hairspray chipping down to the metal, etc. Looks fantastic.
Rebel Scale: my modeling website
Top

Brilliant start as usual. Sometimes I think I should just take a year off and MODEL EVERY DAMN DAY. I have 600 kits in the stash and if I could sell built ones on an average of $100 a pop I'd be fine for the year. At the rate you're cranking these out you could probably do the same

nicholassagan wrote:Brilliant start as usual. Sometimes I think I should just take a year off and MODEL EVERY DAMN DAY. I have 600 kits in the stash and if I could sell built ones on an average of $100 a pop I'd be fine for the year. At the rate you're cranking these out you could probably do the same

Don't let this and BB-8 fool you... my modeling is damn near glacial at its usual pace; these kits just happen to be relatively quick and easy! It's funny you should mention selling built kits because when I texted my friend (the same guy that commissioned me to do three TIE fighters with Luke's X-wing and then ended up buying my Porkins' Red 6 X-wing, too) these pictures, he expressed interest in buying it from me when I'm finished with it. As much as I would like the money from selling it, I'll probably keep it because I have no Bandai starfighter kits in my display (just some of the figure kits). I've done three TIE fighters, one TIE Advanced, and two X-wings but none of them live in my house!
Top

Anyway, if you document the shit out of it then you can appreciate it anywhere, any time 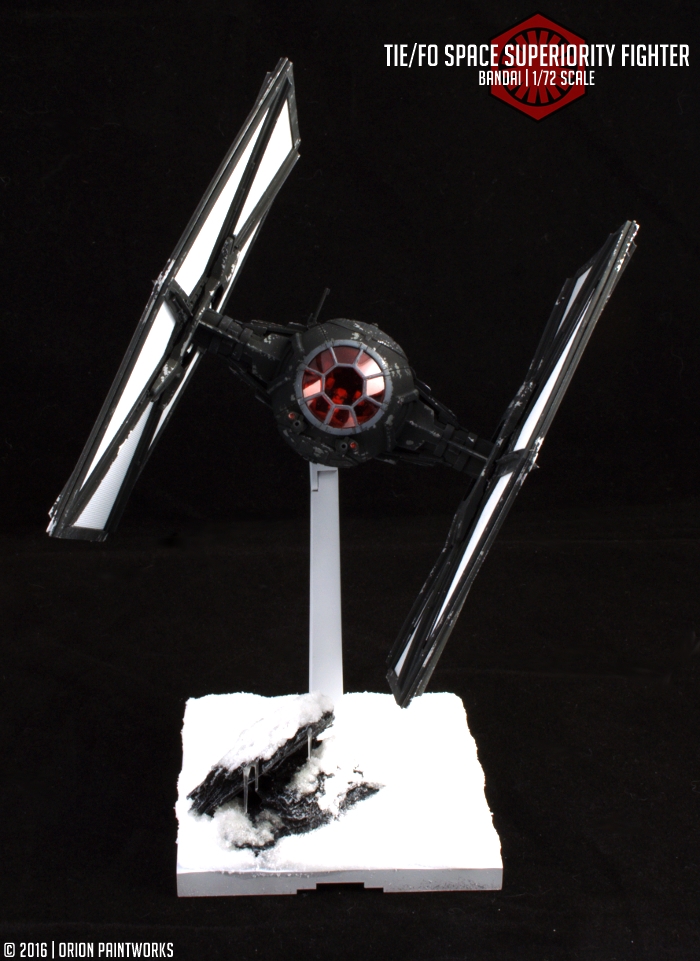 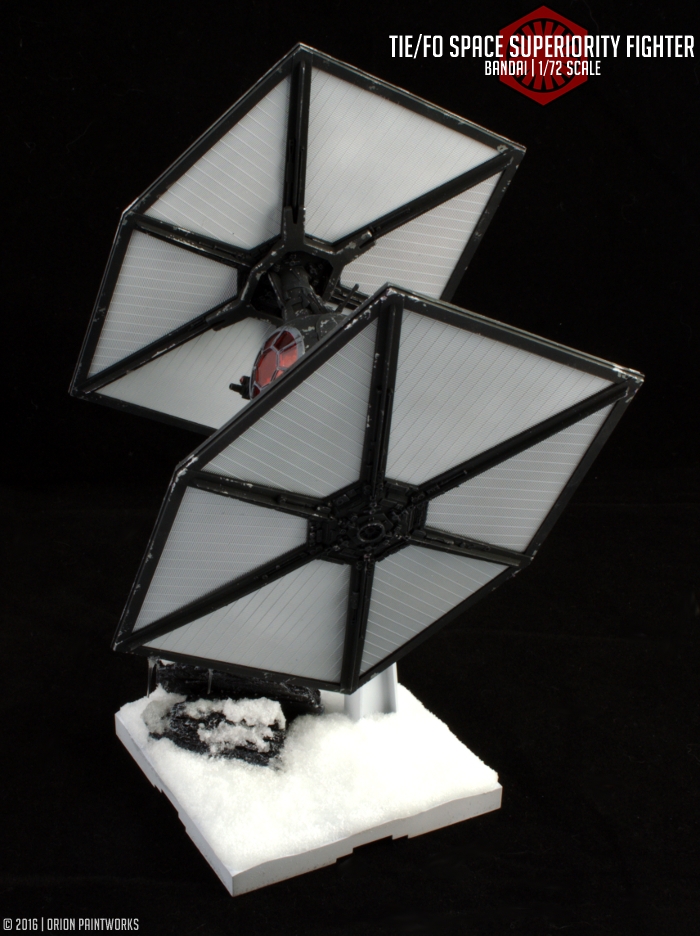 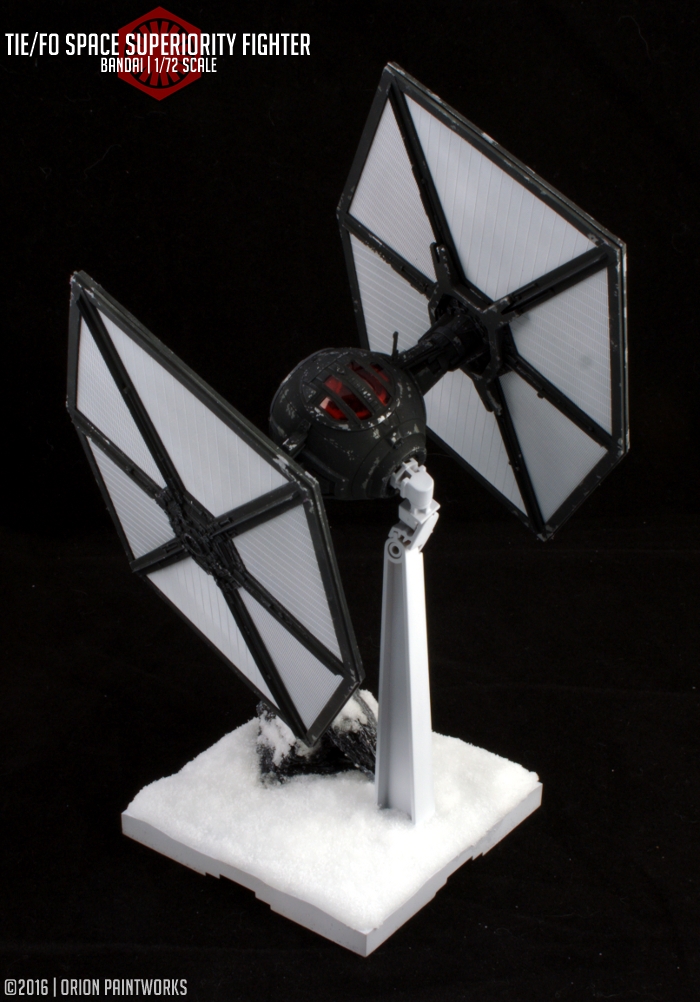 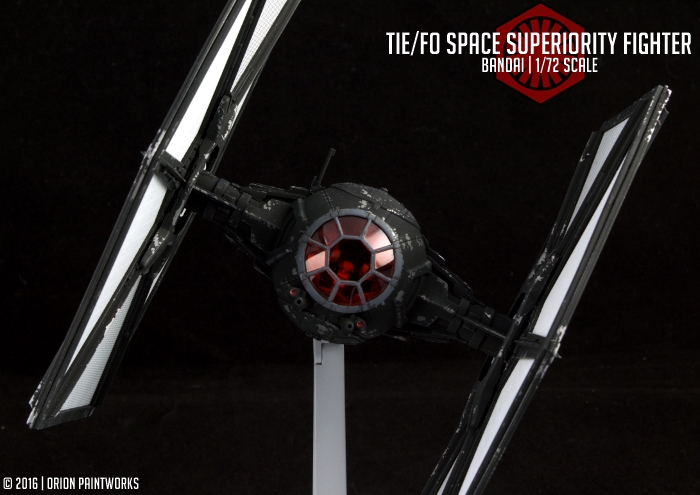 All-in-all, I think it turned out okay. When painting this I remembered how difficult black is to pull off on a model and how annoying it can be to photograph properly. Speaking of which, I think I'm going to invest in some new photo backdrops because this felt-like one I have now pisses me off!
Top

Fantastic finish! Simple yet goooood. Yeah, a white backdrop would set it off though

Fantastic. I love the ice-cycles on the base.
Rebel Scale: my modeling website
Top

Thanks! They're a little out of scale, but rule of cool prevails!
Top
Post Reply
11 posts