by nicholassagan
Ok, you guys remember my Radiant build, right?

SO as some of you recall, this was at Wonderfest a couple years back. I put a lot of work into this and honestly was a little bummed I didn't place. There are definitely some things I would do differently if I had another go, like: more controlled chipping on the white areas, less 'silver' chipping, fewer+smaller silver/black blast marks...the lighting could be brighter, the fibers that went to the brims broke so I would fix those...

I'm curious about ANY constructive criticism/feedback you folks have for this one. 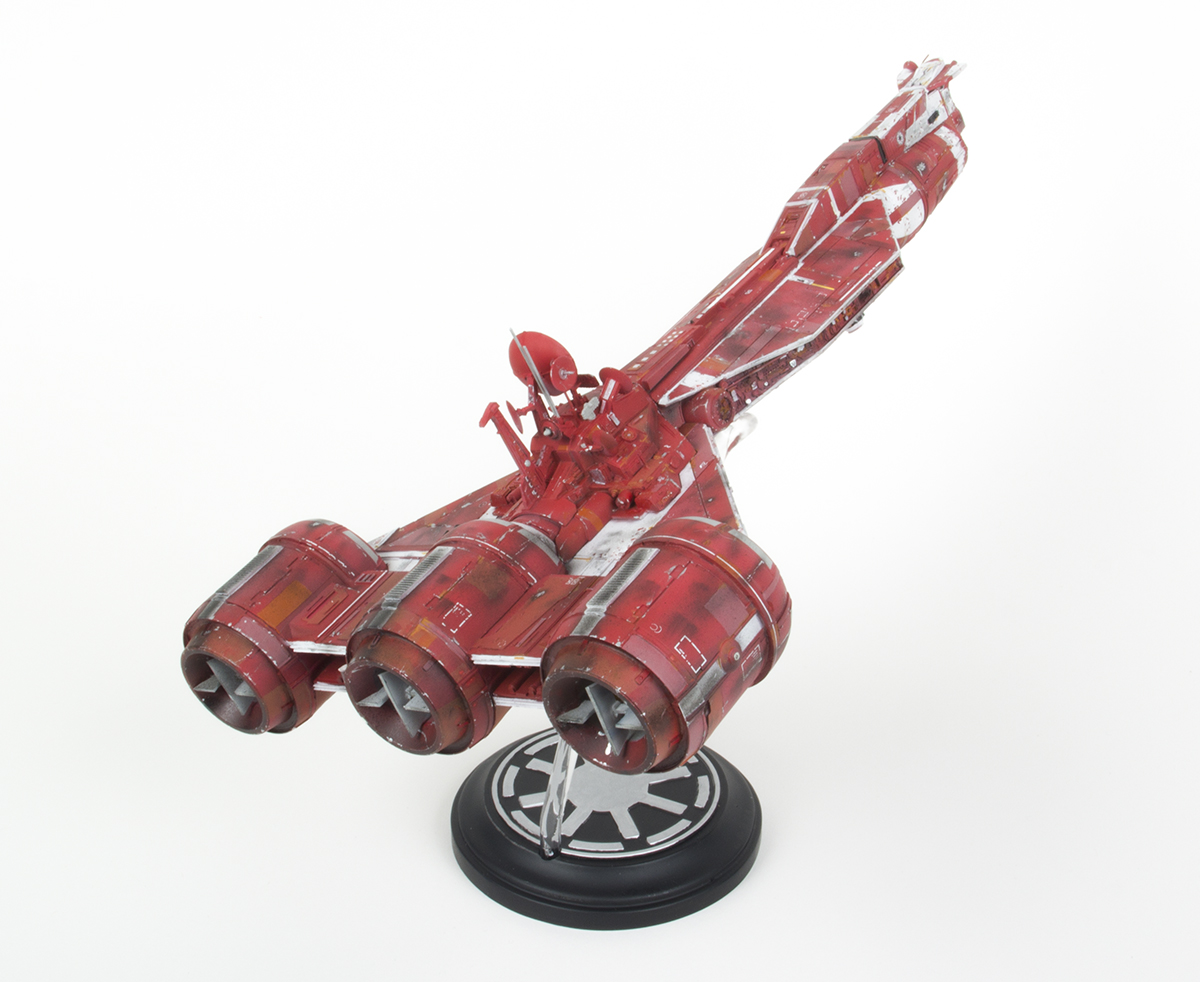 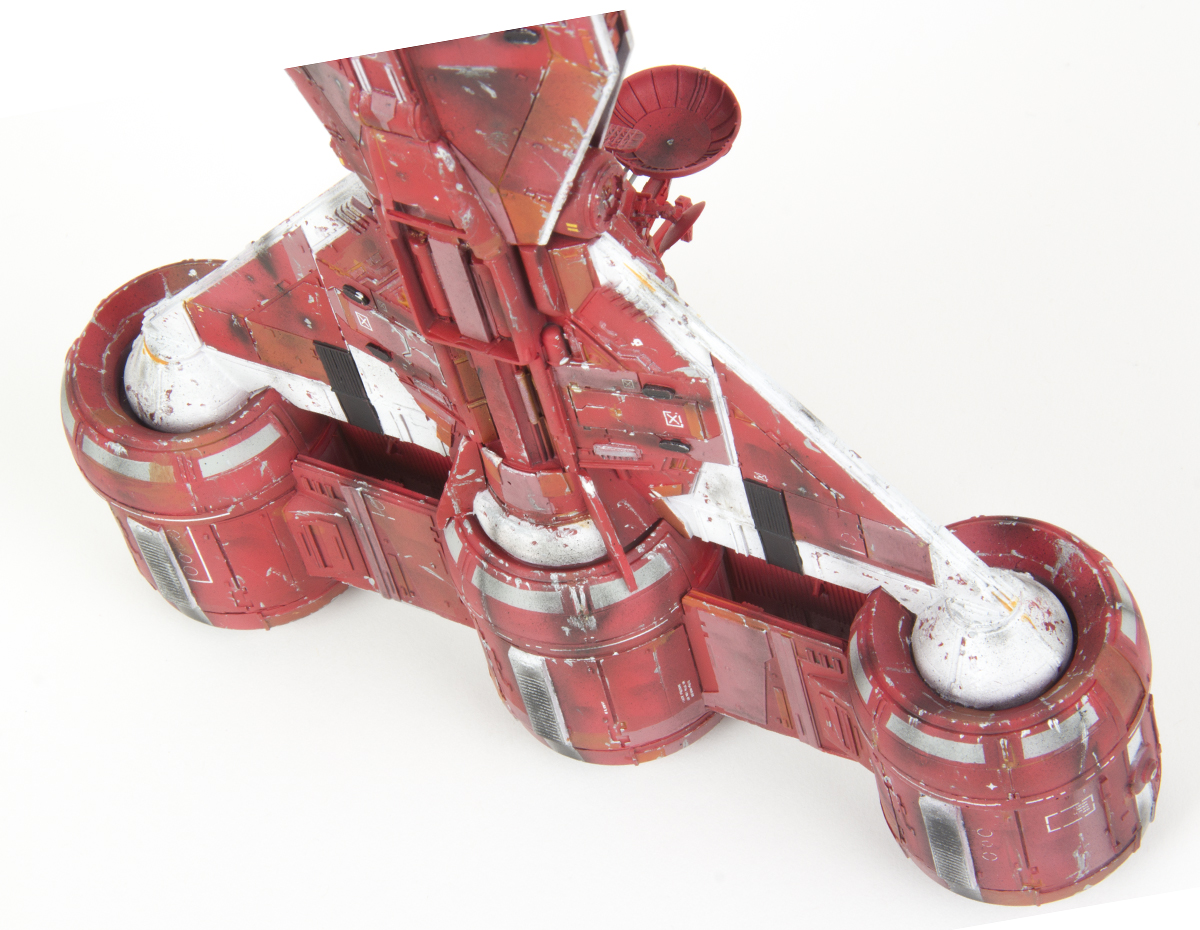 by blakeh1
First off, it really is great work. Better than many could do and something most would envy

If you wanted to try to take it to the next level though I'd say the biggest area to focus on would be getting a better sense of scale with chipping/black smudges. Basically less contrast. I don't know how it looks in person, but in these pictures there seems to noticeable contrast

I struggle with that myself

Looking at those I see more subtle variation in color amongst the individual panels, like an aztecing effect. Also the chipping, dirt is not as bright or dark. It is more like a uniform tone that when you look close you start to see a little streaks here, or a little chipping on edges etc..

In ways, I think painting larger capital ships is harder than painting stuff like one man fighters is harder because of things like that. You have to be careful to mute down a lot of things or even skip weathering all together once you get into scales like 1/2256 and smalller

by nicholassagan
Yeah thanks! That makes sense! I didn't think about it in terms of scale-appropriateness before. I was looking at the studio model pics more as a pattern reference and not a tone reference....maybe a super thin coat of a diluted/faded red would have blended everything a little more (whilst masking the white)?

by blakeh1
I think an "overspray" of a darker red to tone down the red, then maybe even a white over the whole thing to get a more faded sun bleached look might be all that is missing.

It's a technique I haven't really ventured into myself, but it is something I really need to add to my techniques. I've seen other people use it and have seen it to great effect on railroad models especially.

I'm always scared to try for fear of ruining a good paint job. I've got to get more confidence with the airbrush

by nicholassagan
A good airbrush makes all the difference. I picked up an Iwata last summer and my painting improved quite a bit.

by Unreality
I don't know what to say about this. I loved it when I first saw it, and I can't imagine why they passed it over.

Now, I will say, it is more colorful and weathered than the screen-version Radiant VII, but I like this version. I love the layers of color and weathering you did. And you can tell you paid attention to the panel lines when you added chips. All I can think is you got some judges that thought it was overdone for the Radiant VII.

Granted, I've never been to Wonderfest, so I don't know how those judges are. I know the few model shows I have here (mostly armor) the judges are all about accuracy, less about how artistically awesome something looks.

by dupes
I know I've said it before, but I'll say it again - I have NO idea how your stuff didn't medal. I've judged a LOT of model contests over the last ten years or so...and could find no reason that these would be snubbed. At all. Especially in a format that's G/S/B (vs an IPMS-style thing where you could potentially be beaten by something Hacker-like if it were to show up) they should have earned an award for sure.

by srspicer
Maybe I'm waaay to late to be helpful here, but at first glance, it is too busy with painting effects and not enough depth to the surface.
'KISS' theory works best in a competition. I was privileged enough to judge a WF, 2012 or 2013 I recall. You can tell when someone is trying too hard on a model. I did take the time to review Your flicker gallery and here is what I see;
-the silver chipping is obviously brush strokes and too much of it
-some of the white panels on the engine cowl fronts are not consistent in shape
-shaded panels should not cross over scribed panel lines
-maybe a diffuser lens over the engine lights
- the big thing for me is that I can see the fitment gaps for the battery access.
-an over-all semi-gloss coat may help to smooth out the surface.

I hope this is helpful