Starting with the interior of the cockpit, I painted it using various Vallejo greys, drybrushed it with some Tamiya metallic pigments, and then picked out some details. I also painted Poe using a mix of red and orange Vallejo paints for his flight suit and then free-handed his helmet.

After priming the entire model with Alclad grey primer, I gave everything a coat of Tamiya German Grey (XF-63) with a couple of drops of Flat Blue (XF-8) added to it. A thin, splotchy coat of NATO Black, which despite it's name is actually a very dark grey, was added on top of the German Grey base color. These two colors make the "undercoat" of the model and is what will be showing under the paint chipping. I used a torn piece of foam to apply Vallejo Liquid Mask along the leading edges and anywhere paint chipping would accumulate. Once that was dry, I gave the entire model a light coat of Flat Black (XF-1) mixed 2:1 with German Grey, which served as the final "black" paint. Some of the metallic bits on the S-foils were painted with Tamiya Gunmetal (X-10) and the laser canon tips, barrels (painted after I took this picture), and engine nozzles were painted with Alclad Aluminum and given a little discoloration with Alclad Pale Burnt Metal.

In addition to painting the fuselage and S-foils, I masked the canopy and gave it coat of Alclad Aluminum, sponged some liquid mask on it, and then a little bit of Alcald Dull Aluminum to give it a worn look.

Somebody has got to comment here...as that is awesome. The weathered black is looking spectacular, and the Alclad bits really pop out on the cannons.
Rebel Scale: my modeling website
Top

After completing all of the "black" for the body of the ship, it was time to move on to the distinct orange and grey markings. Even though the pattern of the markings is fairly simple, it still ended up being a rather complex masking job! 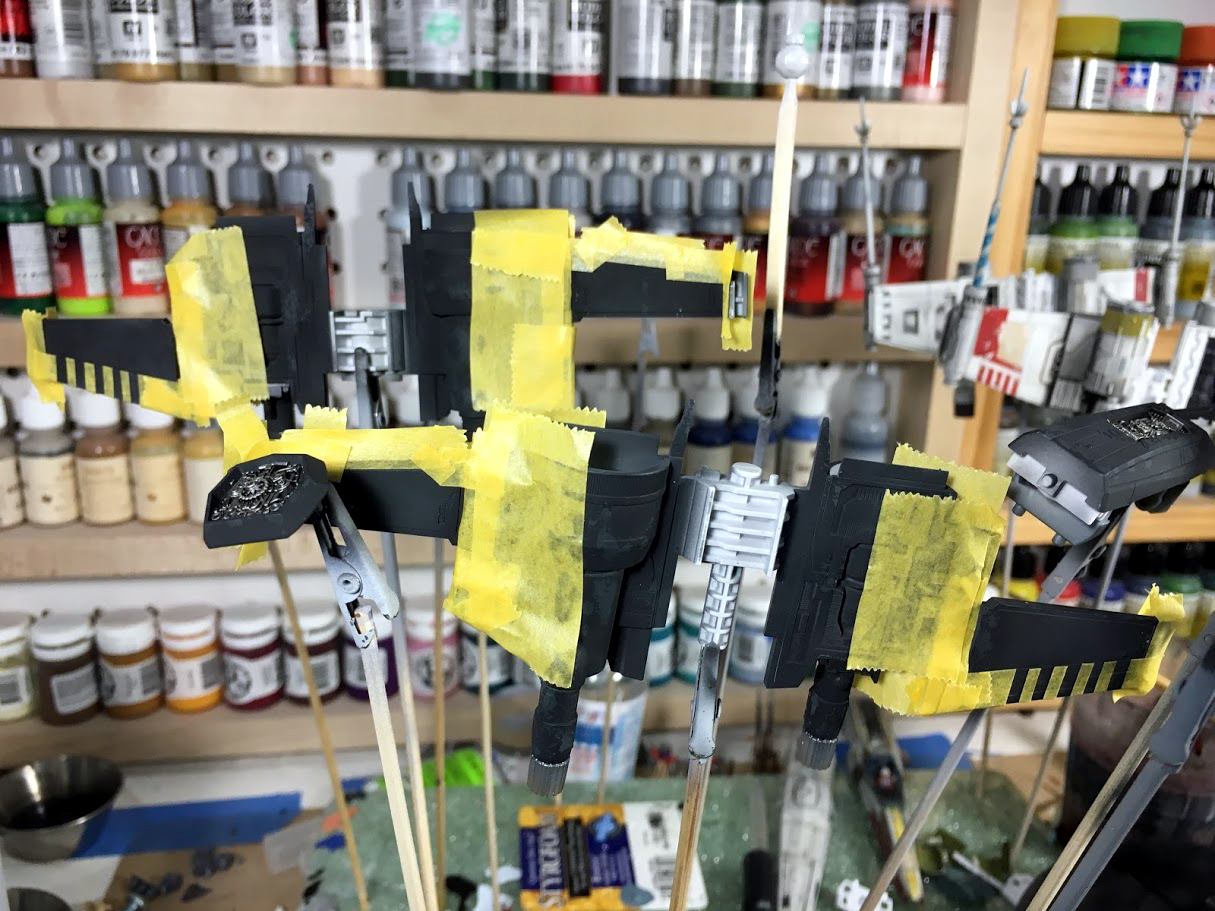 A lot of the pattern follows panel lines, which is always welcome because it tends to make the job a little easier, especially with how crisp the panel lines are on these Bandai models. As to be expected, the hash marks on the rear wings were the most difficult task. In my first attempt, I placed 2mm wide strips of tape on the wing and tried to cut along the panel line. Needless to say, it wasn't exactly easy. Feeling frustrated, I came up with the idea of using the decal sheet as a template. I placed the strips of tape between the decal markings and used a straight edge to cut the tape at the appropriate angle. This ended up work much better!

After the masking was complete, I sponged some liquid mask on and gave all of the soon-to-be orange panels a splotchy undercoat of Tamiya Flat White (XF-2) to make painting the orange easier. I mixed an orange using Vallejo Model Air Orange (71083), VMA White (71001) and VMA Yellow mixed 4:4:1 with just a touch of VMA Hull Red (71039) added to it (this is the same orange I used on BB-8). After a couple layers of that were on and dried, I sponged large sections of the panels with liquid mask and applied a darker orange on top. The darker orange similar to the previous mix except with a little less white and a full drop of VMA Hull Red. I also painted the handful of grey panels using VMA US Grey (71047) and Light Grey (71050) mixed 2:1. 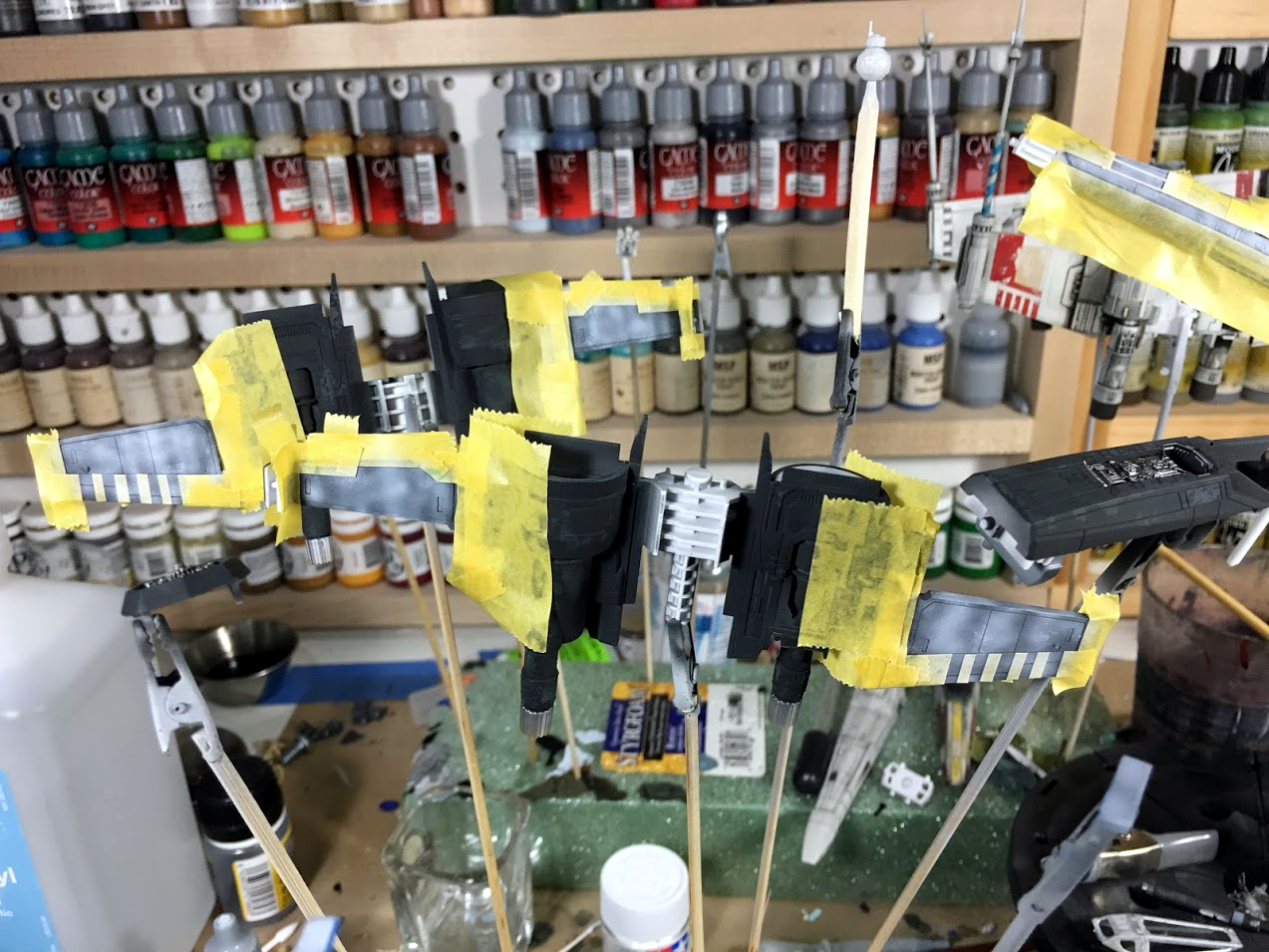 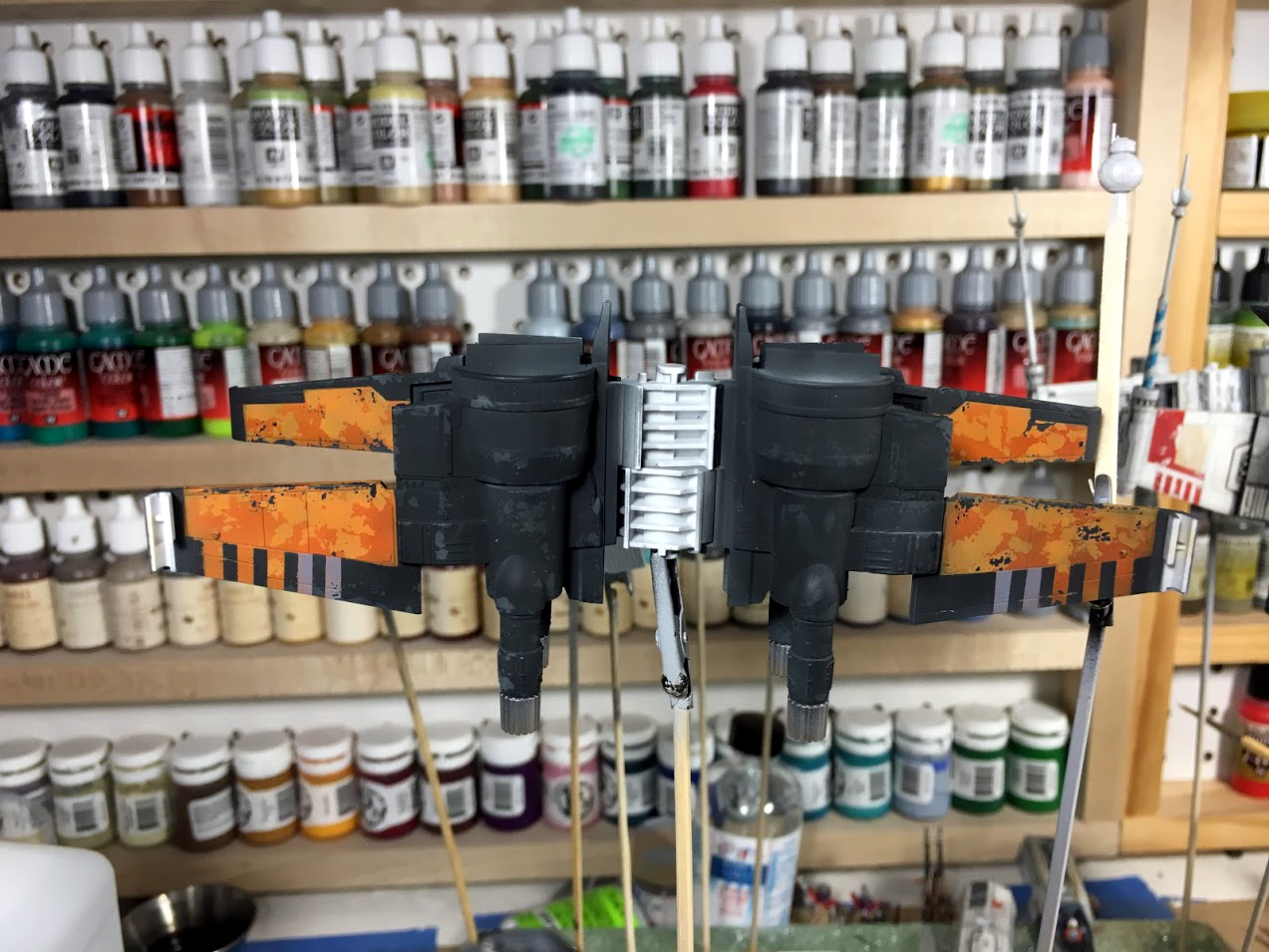 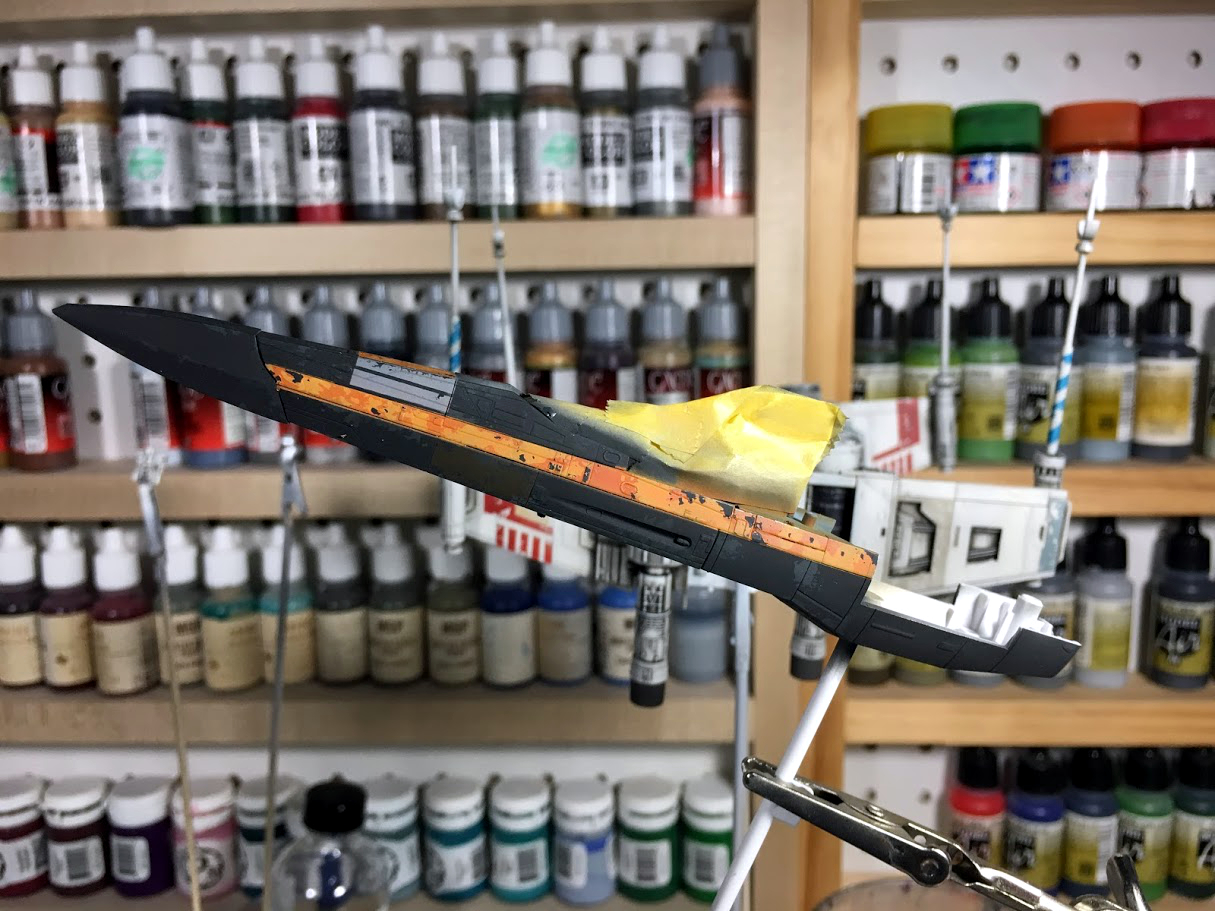 I removed the masking tape and wiped the liquid mask away with a gloved finger (I've found that it comes off the surface of the model better using a latex glove). I decided that the interior "engine bays" needed a little variation so I painstakingly masked them all off and gave them a coat of, quite fittingly, VMA Engine Gray (71048). They'll eventually get a wash and a drybrush of metallic pigment to give them a worn look. I also went around the fuselage and painted a couple of different panels in various shades of grey just to give the surface a little more variety. 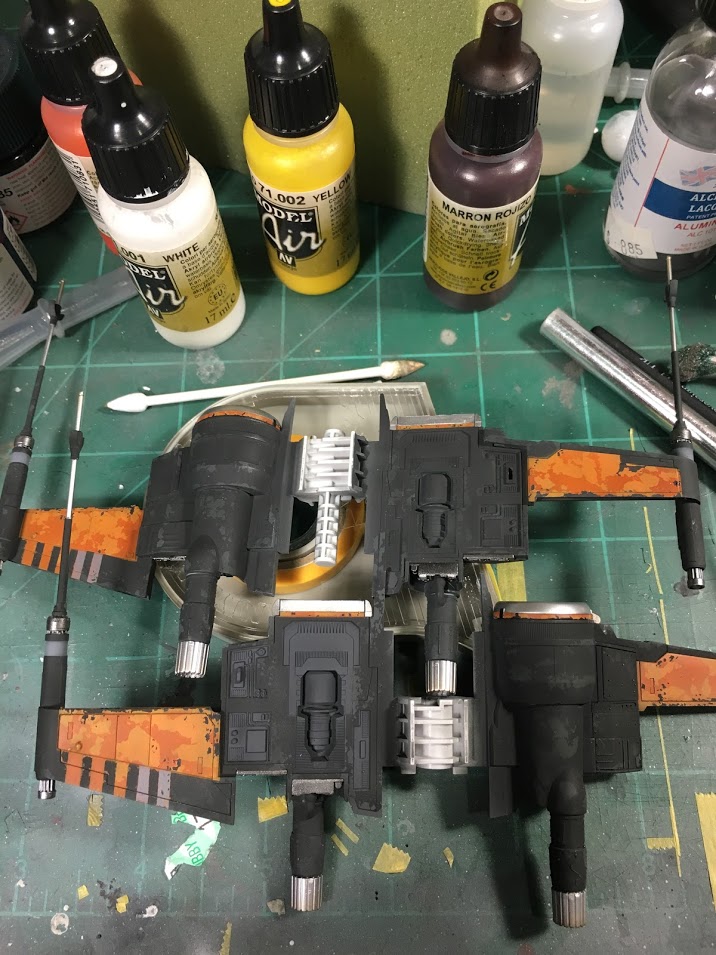 With all of the panels complete, the model will get a coat of Future before giving it a black panel line wash and applying a few small decals.
Top 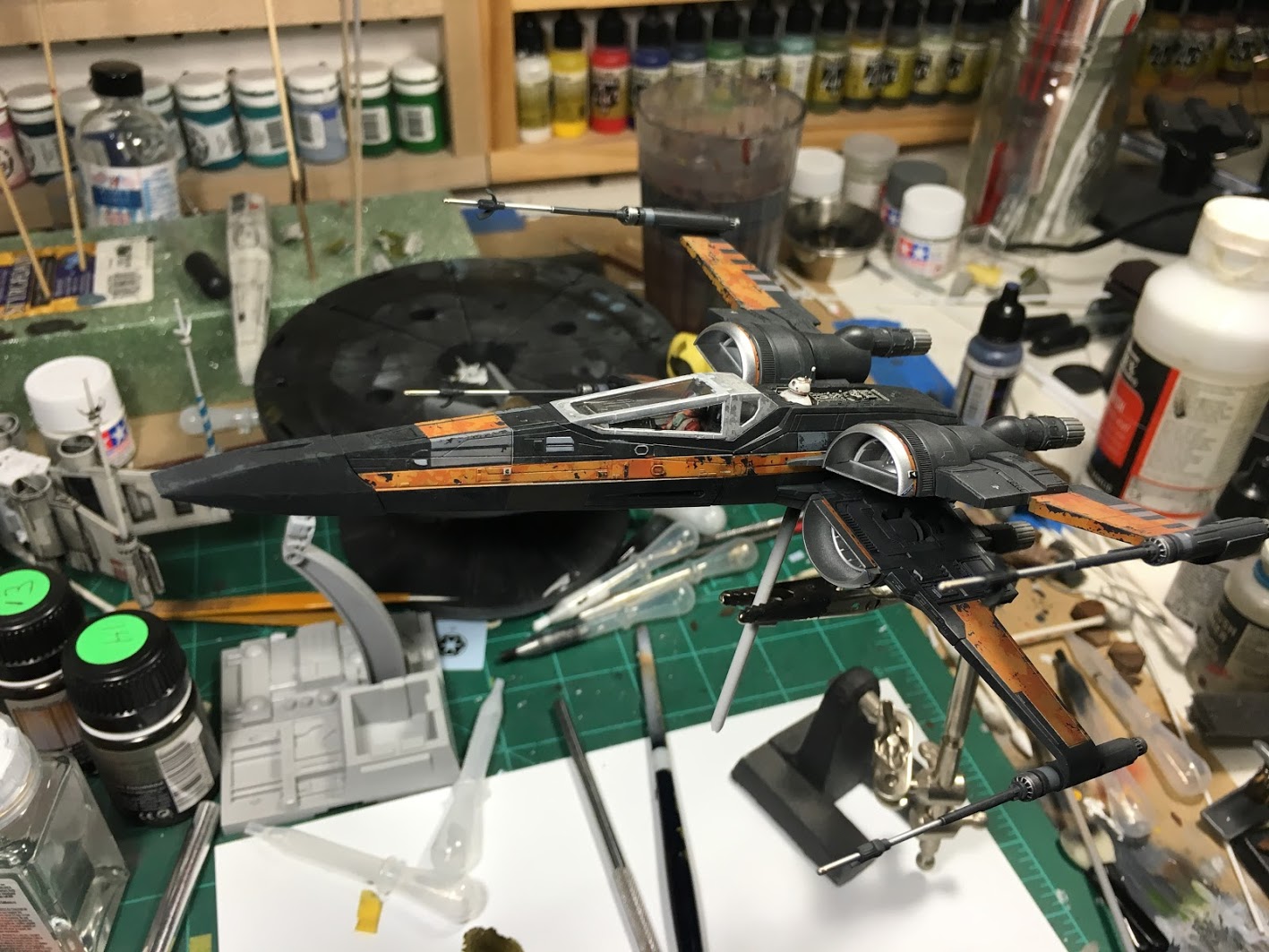 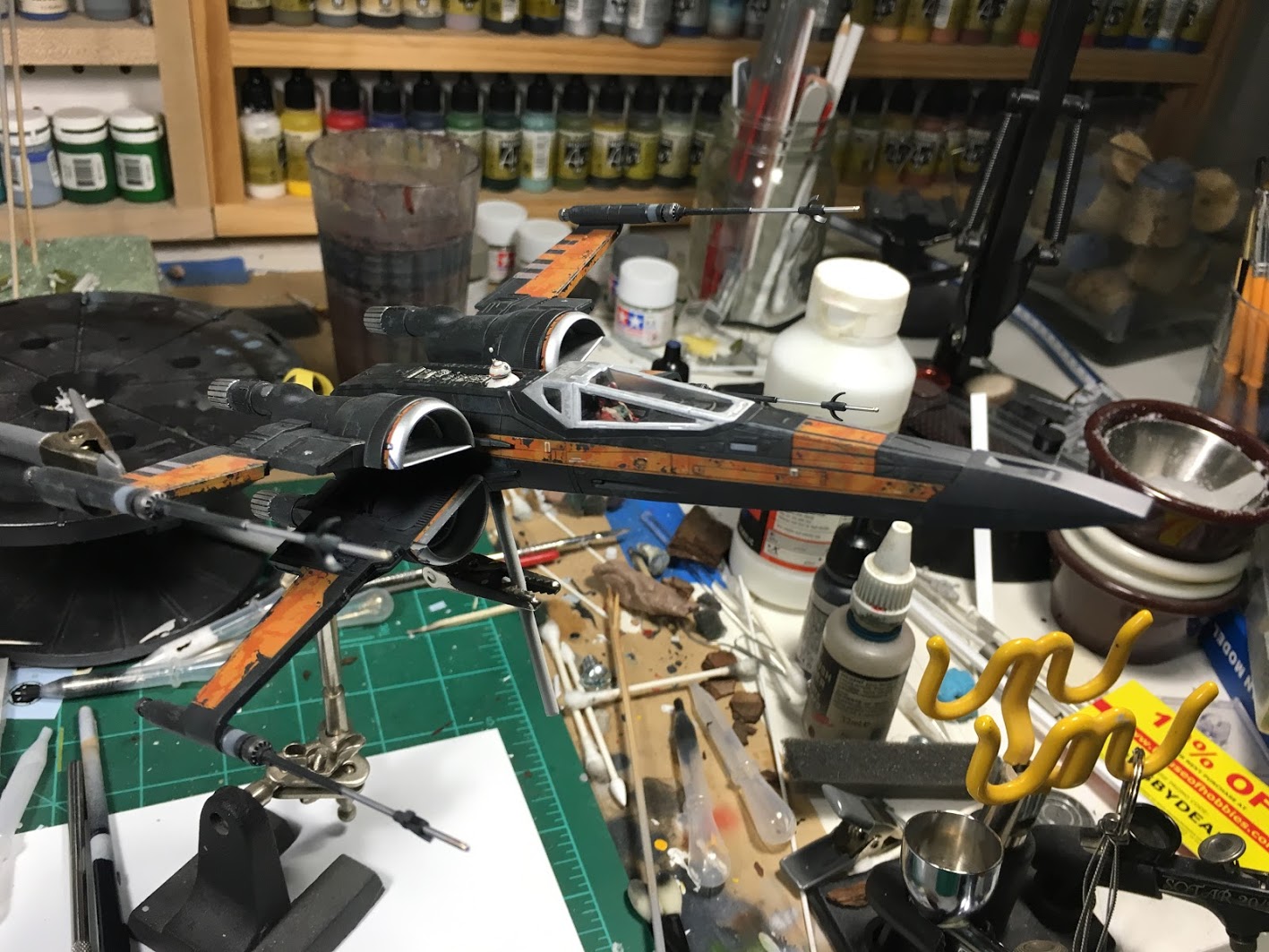 After the black oil wash had dried, I gave the entire model a satin topcoat using Tamiya Flat Base mixed with Future. I decided to use satin instead of my normal matte because I think it makes the "black" of the ship a little more rich. I might add a few streaking effects and some weathering powders just to add a little more variation in the weathering, but for now I'm calling the majority of the work complete.

The client and I have decided to scrap the supplied base because it's a rather bland and boring desert scene that doesn't fit well when the model is painted in Poe's Black One livery. Instead, I will make a wooden base and paint to match Poe's helmet he's sporting in the Starkiller Base attack during the climax of The Force Awakens. I've also ordered some 3mm clear acrylic rods from Hong Kong to use for the custom base because they fit perfectly in the slot on the model for the supplied base.
Top

That is so cool! Thanks for writing all of that out, the black is perfect. I'll have to save all of that for when I get around to mine.
By Grapthar's hammer... what a savings...
Top
Post Reply
21 posts